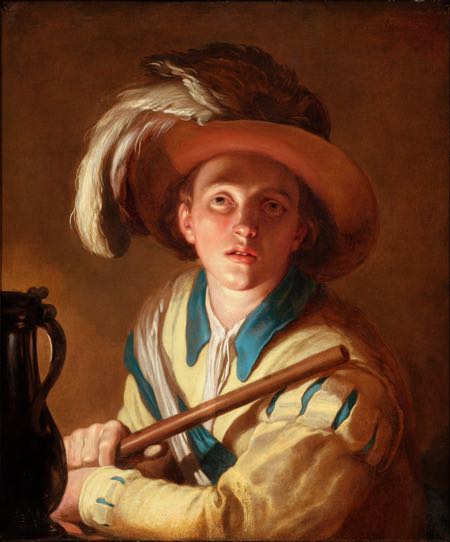 In a composition somewhat similar to those of his contemporary Georges de La Tour, 17th century Dutch painter Abraham Bloemaert has lit his subject by candle or lamplight that is hidden behind a foreground object — in this case a dark vesssel that also serves as a compositional element to hold the left edge of the image, and balance the darkness on the right.

Both the dark object and the dark background serve as contrast to emphasize the illumination of the musician’s face, which has the added interest of being uplit.

The highlights and shadows round the eye, the highlights and darks on the hat as well as the feather and light clothing against the background, form a series of concentric rings of light and dark, a target effect. This was not uncommon among Dutch paintings of the time, and can be seen in the work of Vermeer, among others.