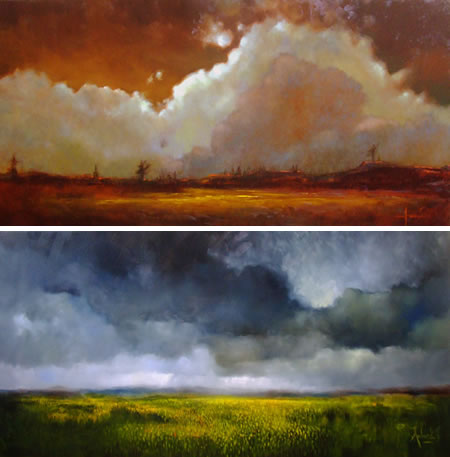 Ambera Wellman started experimenting with oil painting in 2004 at the age of 22. She has just moved from being a self taught artist to being a student at the Nova Scotia College of Art and Design last year. She already seems to be finding a mature voice, at least in one series of paintings.

If you browse back through her blog you will find paintings, and a few drawings, of a variety of subjects, but it is her series of paintings of skies and clouds that immediately grabbed my attention.

Great sheets of cloud masses, in turn glowing with brilliant color or dark with more subtle tones, roil and billow across her canvasses. Some of her skies are luminescent with reflected light, almost as if the clouds were generating their own light. In the darker canvasses, they have the opposite feeling. as though the cloud forms were devouring the light.

In her older works, the landscape above which the clouds do their stuff is more varied and often busier with foreground objects; in her more recent work, she keeps the foreground in check and lets the clouds and skies dominate.

Wellman also has a dedicated web site, in which, in addition to her land/cloudscapes, you will find her photorealistic portraits as well as an interesting selection of reproductions, in which she has replicated well-known paintings.

Unlike the more common factory-like process of churning out reproductions of the same painting over an over (see my post on Dafen, China), Wellman has made the copying of these paintings part of her learning process. I don’t know if she chose the paintings to reproduce, or if they were commissioned on request, but they vary from Ingres to Modigliani to Vermeer to Chagall to Delacroix, and she apparently picked a few things about skies from her study of Monet and N.C. Wyeth.

In preparing for a new exhibit of her cloud-themed landscapes at the Black Duck Gallery, in Lunenburg, NS, she recently asked her blog readers to give her feedback on which of five paintings to choose for the advertisements to accompany the show; perhaps indicating that though she is mature enough as a painter to have a clear voice, she is young and open minded enough to step back and look at the response her images elicit from others in judging her path.