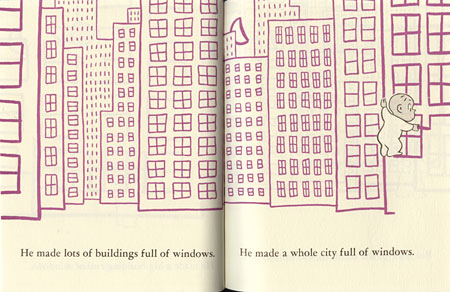 When I was about 8 years old my parents made the mistake of giving me a wonderful book.

It looked like an innocent enough childrens’ book. It had a brown cover and a drawing of a young boy, who, I would soon learn, was “Harold”, and he had a large purple crayon with which he was apparently drawing large purple lines all over the cover of the book on which he resided.

The book was, in fact, called Harold and the Purple Crayon and it was indeed a dangerous thing to give to a child prone to flights of fantasy and a strong tendency to want to use his crayons “outside the lines”.

Harold, you see, has a large purple crayon with which he creates and modifies his world. The book doesn’t outline this in such fancy words, of course, it just starts out with Harold deciding, “after thinking it over for some time”, to go for a walk in the moonlight.

He draws, apparently on some kind of wall behind him, a forest (consisting of one apple tree), a dragon (to guard the apples), an ocean, a boat, a mountain and an entire city; and they all become magically real (although it all seems quite normal to Harold), and he can walk through them at will — drawing and creating his world as he goes.

That giving a book with this radical and mind-altering concept to his impressionable young son was indeed a mistake, only dawned on my father when heard me making odd scraping noises behind the couch and, pulling the couch away from the wall, discovered that I had drawn and scribbled, with my own magical crayons, my beautiful, multi-colored crayons, my waxy, incredibly-hard-to-wash-off, paint-resistant, indelible, cling-to-your-wall-forever, hours-of-elbow-grease-to-remove crayons,… on a considerable area of the wall behind the couch.

My parents didn’t scold me though, bless their hearts forever. The were never likely to discourage me from drawing or creating in any way, but it was… strongly suggested that I use my crayons on other surfaces; and I was kept in supply with lots of coloring books (which I wasn’t all that interested in) and big sheets of inexpensive paper (much more to my liking) from which I would eventually learn to coax the magic of creating a world of my own liking by drawing what I wanted.