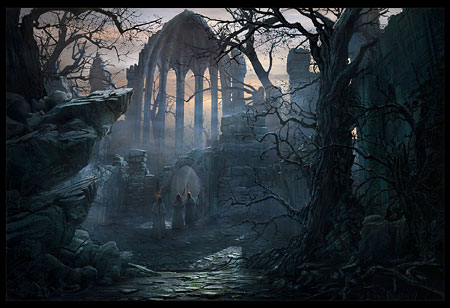 If you, like many people, envision the process of 3-D CGI (Computer Graphics Imaging) as arranging a few wireframe shapes and pressing the “render” button, you may as well say painting is as easy as taking a brush and slapping some color on a canvas.

The same skills of composition, proportion, perspective, color and, yes, drawing, are as important in the creation of a successful CGI image as they are in traditional painting. Yes, it’s possible for an amateur to make an image in a 3-D application without knowing those things, and the results are similar to someone trying to paint without them. I’ve seen enough poorly done amateur CGI, and have worked in 3-D applications myself just enough to have some idea of how important those skills are to a good CGI image.

Raphaël Lacoste is a French matte painter and concept artist now living in Canada. He is also an award-winning art director for high-end games in the Prince of Persia series. He uses a combination of 3-D CGI and 2-D digital painting in Photoshop to create beautifully atmospheric images that are at times evocative of classical and 19th century paintings.

The image above, Path to the Gothic Choir (large version here), is the subject of a feature article on the CGSociety site that goes into some detail about the process of creating this kind of image, including preliminary sketches, initial renderings, details and an image of a painting by 19th Century German romantic painter Caspar David Fredrich called Cloister Graveyard in the Snow, that was the inspiration for Lacoste’s image.

Lacoste’s own site has a nice selection of his moody and atmospheric matte paintings and concept art, including a wonderful evocation of Arnold Böcklin’s The Isle of the Dead. (See my previous post on Arnold Böcklin.)

There is also a gallery of his work on the CGSociety’s site.