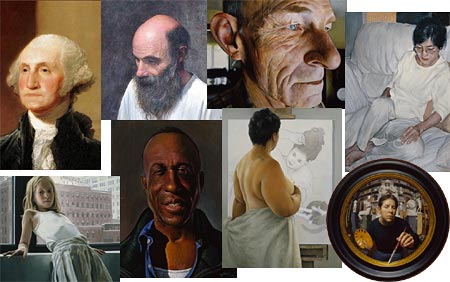 It’s hard to get to the National Portrait Gallery.

Not because it’s remote, at least for those of us on the east coast of the US. Like most of the museums associated with the Smithsonian, the National Portrait Gallery is conveniently located in central Washington, D.C. (a few blocks north of the Mall at Eighth & F Streets).

It’s difficult to get to the NPG because it’s too conveniently located in the midst of Washington’s cornucopia of stupendous galleries and museums.

The National Gallery of Art alone is enough to dazzle you for days on end with it’s fantastic collection. Add in the Hirshorn Museum of modern and contemporary art and the Freer and Sackler Galleries with their stunning collections of American, Near Eastern and Far Eastern art, and you have an art overload that can keep the art lobe of your brain stupefied for weeks. (Add in the other fantastic museums on and around the mall and you have what should be thought of as the nation’s cultural Disneyland.)

So the National Portrait Gallery often gets overlooked, partly from being lost in the cultural overload and partly because it conjures up images of dark canvasses of presidents and Secretaries of the Interior in stiff poses, with dour expressions on their civil servant faces, leaning on wooden desks in gloomy paneled rooms.

While the aforementioned dark portraits are there, so are dazzling contemporary portraits and changing exhibits, and the museum is augmented by its presence in the same building with the American Art Museum.

Now is a great time to discover these museums because they’re back, bigger and better than ever, after being closed for a six-year renovation of the Patent Office Building, which houses both museums. The galleries’ collections are on display in a vastly improved and expanded display space collectively called the Renyolds Center.

Even though the building renovations are complete, the web site is still not filled out in many places, but you can explore a few exhibits, like the Portrait Competition below and some special features like an interactive feature on Gilbert Stewart’s famous full-length portrait of the US of A’s dear old dad, the real George W (image above, top left).

One of the 14 exhibitions with which the museum reopened on July 1 of this year is the winners of the Outwin Soochever 2006 Portrait Competition, which runs until February 19 of 2007 (image above, clockwise from Gilbert Stewart’s portrait of GW at top left: Kris Kuksi, James Seward, Sarah Sohn, Will Wilson, Chris Campbell, Armando Dominguez and Laura Karetzky).

2 Replies to “The National Portrait Gallery”