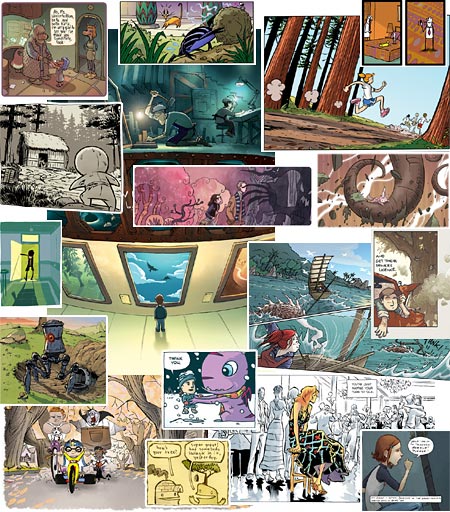 For those of you who think that “comics” = pointlessly endless stories of musclebound, spandex-clad goons, grimacing as if terminally constipated while bludgeoning one another senseless, I once again offer the antidote and alternative of the Flight anthologies of comics stories.

I like to emphasize the release of these particular books, not only because they’re excellent, but because I think they offer those who have been put off by the harsh face presented by mainstream American comic books a potential path into the joys of an entire and often overlooked medium of expression.

I’ve mentioned previous Flight comics anthologies before, here and here, as well as in posts on some of the individual artists. The newest volume, Flight 4, is due to be released this summer.

Newsarama, the venerable online comics news source, has posted a 57-page preview of the upcoming volume. Click on the preview images and you’ll find images of pages from the book, reproduced large enough for you to get a nice idea of some of the wonderful variety of artistic styles and approaches to storytelling you can expect from this talented group of young artists.

From the look of the preview, Flight 4 promises to be the strongest volume yet.

(BTW, just for the record, I really like many of the pointlessly endless stories of musclebound, spandex-clad goons, grimacing as if terminally constipated while bludgeoning one another senseless in American mainstream comics. I just think it’s unfortunate that many people think that, and the watered down leftovers that pass for newspaper comics these days, are all that comics have to offer.)

One Reply to “Flight 4 preview”