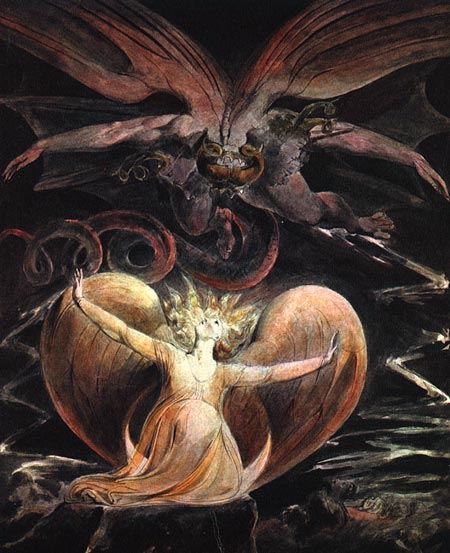 William Blake was in turn ignored, considered mad, and called a genius and one of the greatest British artists. A visionary painter, printmaker and poet active during the late 18th and early 19th Centuries, Blake pulled elements from classicism and romanticism, stirred them in the fires of his own wild imaginings and produced art that stood outside his time and the normal chronology of art history.

His classical influences came from dramatic painters like Raphael and Michelangelo, and particularly printmakers like Durer. Blake worked in a fascinating process of “relief etching” in which the traditional method of scratching lines out of wax resist and biting those lines with acid was reversed by drawing the lines with acid resistant material and biting away the rest of the plate, leaving the raised surface to print, like a woodblock.

Blake had a history of visions, even from childhood, reportedly seeing God, Angels, and his dead brother Robert. Out of his visions he created his own mythology, populated with fantastical images that would give modern concept artists a few lessons in character creation. Blake continued through his life to find more inspiration in his imagination than in the immediate world around him.

Though he had little love for the established church, he was fascinated with the Bible and did several series of biblical illustrations, most notably for the book of Revelation. He also produced illustrations for Milton’s Paradise Lost, as well as taking on a commission to illustrate Dante’s Inferno, which was started, but incomplete a the time of his death.

Blake associated with other artists of his time who were involved with what they saw as a spiritual and artistic revival and considered a “New Age”, as embodied in the philosophy of Christian mystic Emanuel Swedenborg. These included John Linnell and Samuel Palmer; but most of them, like Blake, did not see commercial success in their lifetimes.

Though he admired the works of the Renaissance masters and the traditions of Gothic art, Blake’s watercolors and etchings often have an element of primitivism that may account for the lack of respect during his lifetime, but from a later vantage point have a remarkable power and presence. The image above is “The Great Red Dragon and the Woman Clothed with the Sun”.

Blake’s art and writing have inspired generations of artists, poets and, in the 1960’s, found particular resonance with a counter-culture that found him a champion of free-thinking, sexual liberty and the triumph of imagination, as exemplified by the opening lines of his lyrical poem Auguries of Innocence:

To see a World in a Grain of Sand
And a Heaven in a Wild Flower,
Hold Infinity in the palm of your hand
And Eternity in an hour.

Yep, sounds like a tripped-out, hippified, counter culture freakazoid to me. Right on.