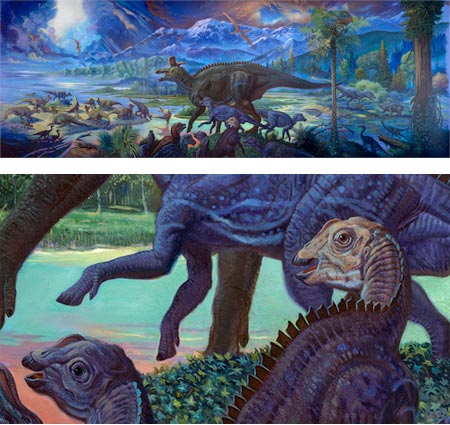 Prior to the influence of pioneering paleontological artist Charles R. Knight, the display of dinosaurs and other prehistoric animals in natural history museums consisted mostly of isolated fossilized bones in glass cases, fascinating to scientists to be sure, but perhaps as exciting to the general public as mounted butterfly specimens.

After Knight’s work with paleontologists at the American Museum of Natural History to display the animals in realistic settings, and, later, Rudolf Zallenger’s astonishing murals for the Yale Peabody Museum, the display of prehistoric life by museums would never be the same.

These days, when natural history museums are competing with multimedia, games and popular entertainment to capture the attention of the public, the skeletons of prehistoric animals are mounted in the most dramatic and theatrical manner possible within the framework of scientific knowledge.

As museums renovate their dinosaur halls, which are often the focal point of a natural history museum’s public relations strategy, emphasis is placed on creating an immersive experience, a significant part of which is created by the presence of large murals depicting life in prehistoric settings (see my recent post on the spectacular new murals at the Carnegie Museum of Natural History by Robert Walters and his studio).

Stout is a multi-talented painter, paleo artist, concept designer, illustrator and comics artist who I profiled in 2006. The exhibit also includes work by Doug Henderson, Raúl Martin and others (artist bios here), but Stout’s paintings are the headliner.

His murals for the exhibit depict prehistoric life from several eras. From the age of giant mammals we see huge ground sloths, fierce sabertooth cats and giant mastodons. Reaching back into the dark mysteries of the Cretaceous Period and the Paleocene Epoch, Stout takes us into the depths of seas teeming with life. And, of course, there are dinosaurs; in this case a tableau of costal dinosaurs awash with brilliant color, dramatic skies and ingeniously theatrical lighting effects. All of them are vibrantly painted with Stout’s trademark emphasis on color, texture and fluidity of line.

Characteristic of the substandard quality of many natural history museum web sites, the SDNHM information on the murals is skimpy and not very informative. However, the museum has posted a wonderful set of high-resolution images of the murals, presumably for use by the press and schools (and, of course, lines and colors readers).

These are nice large files that are (finally!) big enough that you can really appreciate the way Stout has worked with his colors, values and contrasts to sharply define individual elements when viewed up close, but kept all of them working as part of a unified whole when seen from a farther vantage point. It’s also surprising how painterly the images can be when seen in detail.

Stout’s new murals will be featured in the March 2008 issue of Natural History magazine. You can also see some (unfortunately much smaller) images of Stout’s previous paleo life murals and other paintings of prehistoric life on his web site. His terrific book, The New Dinosaurs is still available and is full of his wonderfully expressive paintings and drawings of dinosaurs, often done in a playful nod to the styles of other artists (Art Nouveau dinosaurs anyone?).

Stout fans will also be delighted to know that Flesk Publications (which I mentioned most recently in my post about Steve Rude: Artist in Motion) is planning a volume of his work.