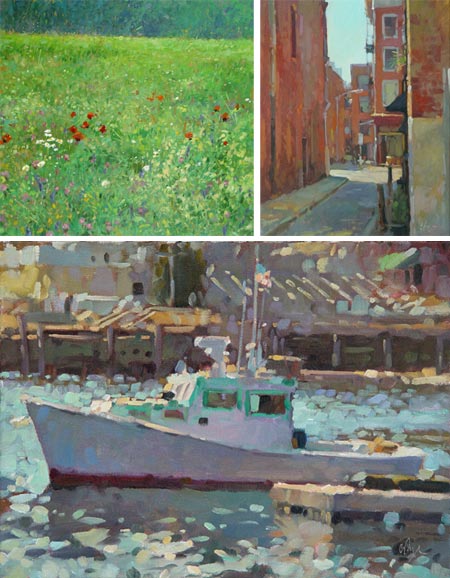 I will often write about artists here on lines and colors whose work I have only seen in digital reproduction on the web. It’s always preferable, though. when I can see the actual work in person, and even better on those rare occasions when I get to meet and speak with the artist.

I wrote about Maine artist Colin Page about a year ago, when he last had a show at the F.A.N. Gallery here in Philadelphia. I did have chance to see his work in person on that occasion, catching his essentially sold-out show on its last day.

This year I was able to make the opening of the new show last Friday, as the First Friday Old City gallery walk was in progress in the midst of the city’s July 4th events.

I was pleased to have the chance to meet Colin and talk with him about his palette, his approach to plein air painting, color theory and his direction in terms of new subjects.

We also talked briefly about his decision to work a bit larger at times, and in more open compositions. Scale is one of those things that you can’t readily get a feeling for when viewing images online (or in print, for that matter), and it makes a difference in your impression of a painting.

Another aspect of looking at paintings that I am often frustrated with when viewing images of paintings rather than originals is the surface texture, the physical character of the way the paint is applied, particularly in impressionistic or painterly realist works.

Page’s work, in particular, has a wonderful appeal in the brush strokes and texture of the paint on the canvas. His lively, remarkably free brush handling, which actually seems to have gotten looser and more confident over the past year, gives his canvasses a kind of textural sparkle that is an integral part of their character when seen in person, but doesn’t often come through in reproductions.

This is one of the reasons that my suggestion to artists like Colin, and many others who show their work on the web, would be to post a few large images, or at least some detail shots, that show more clearly the character of the painted surface.

It also helps, I think, to supplement images of paintings which have been photographed with flat lighting, in an attempt to show the work lit as evenly as possible, with additional images intentionally lit at an angle to show the dimensionality of the paint.

Up close, Page’s paintings are dappled with crisp, textural strokes of brilliant color, that can look almost haphazard, but, on stepping back resolve beautifully into his intended subject. His broader areas of color, when seen up close, likewise break up into fascinating combinations of vivid hues, that can almost seem unrelated at times, but from a normal viewing distance blend optically to make a clear and perfect tone.

He applies his technique, and his terrific knack for strong compositional geometry, to subjects in rural Maine and urban Philadelphia. His trips here to visit family afford him the opportunity to paint the urban landscape, which he describes as a refreshing change from the subject matter in the rural area where he lives. I particularly like the way he uses patches of light and shade in his urban subjects to control and organize the patterns of color that make up the scene, giving focus and depth to what might otherwise be a chaotic jumble of shapes.

You can see a gallery of his work on his web site. You will also find additional paintings on his blog (journal), to which he has been posting with increasing frequency, along with occasional works in progress and thoughts on painting and technique.

In addition, there is a selection of Page’s work on the F.A.N. Gallery web site. (The F.A.N. is one of the few galleries in Philadelphia that I count on to consistently show work that I find interesting.)