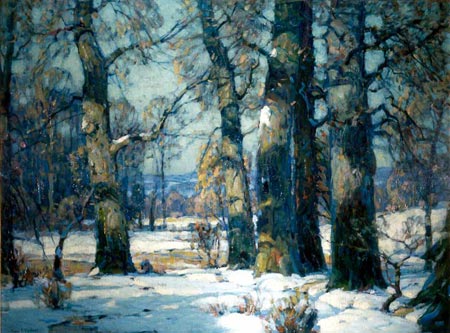 I woke up to an uncharacteristic November snow here in Philadelphia, and my mind jumped to the beautiful woodland snow scenes of John Carlson.

Born in Sweden, John Fabian Carlson moved to the U.S. with his family at the age of nine. He studied art in the evenings and worked as a lithographer during the day, helping to support his family until he was 28.

He then moved to New York and attended the Art Students League on a scholarship, studying with Frank DuMond, and later with Birge Harrison at Woodstock. During his time in New York he also worked as an illustrator, but I’ve been unable to find images of his illustration work.

Carlson became associated with the Art Students League, serving as Birge Harrison’s assistant when the League began classes in Woodstock, and later succeeding him as director. He was later director of the Broadmore Art Academy in Colorado, but returned to Woodstock to found the John F. Carlson School of Landscape Painting.

Though not considered an American Impressionist, he shared their penchant for combining a strong academic foundation with free, painterly brushwork and bright, expressive color, particularly in his later work.

He became devoted to the subject of woods in winter, often in snow – a subject in abundance in Woodstock, in which he found rich variation in color, dramatic arrangements of value and composition, and subtle atmospheric effects.

It’s interesting to compare him to painters like the Pennsylvania Impressionist Edward Redfield, who pursued similar subject matter, and displayed an equally hardy devotion to winter painting out of doors.

Carlson codified some of his teachings into a book, still in print after almost 80 years, as Carlson’s Guide to Landscape Painting.

Despite the somewhat outdated tone of voice, the book is a treasure of landscape paintings fundamentals; and is one of those painting reference books that you come back to again and again, discovering more as your own understanding deepens over time.

Don’t be put off by the fact that the images are in black and white (though a color version would be a wonderful thought for some publisher to pursue), think of the book as akin to books by Hawthorne or Sloan, that are valuable without illustrations at all, and then think of the black an white images in Carlson’s book as a deluxe bonus.

The sections on atmospheric and linear perspective alone are worth the Dover paperback edition’s modest price of ten dollars.

I’ve found a scattering of Carlson’s paintings on the web. Though unfortunately none are large; they are enough to give you a taste of the beautiful atmosphere and compositional geometry that, combined with his mastery of tree forms and obvious love for his subjects, give his winter scenes deep visual and emotional warmth.