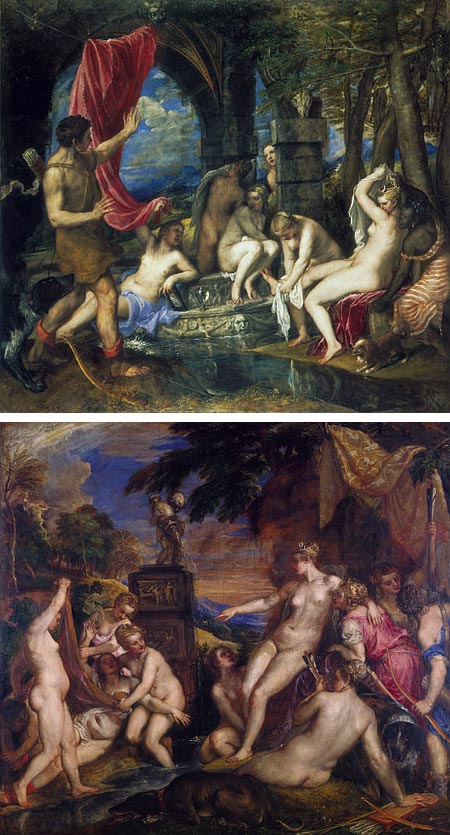 Tiziano Vecellio, commonly called Titian, was one of the great masters of the Italian Renaissance. His reputation spread form his native Venice to Rome and the other art centers of Italy, as well as to Spain and throughout Europe.

His mastery of oil painting, use of color, and strength in all phases of painting — portraits, mythological subjects, allegories, altarpieces and landscapes with figures — along with his painterly approach, made him tremendously influential in his time and well after.

Two of his major works, Diana and Actaeon (above, top) and Diana and Callisto (above, bottom) form the core of a new exhibition at the High Museum of Art in Atlanta, Titian and the Golden Age of Venetian Painting: Masterpieces from the National Galleries of Scotland.

The exhibition includes 25 paintings from the Venetian Renaissance, including works by Tintoretto, Veronese and Lotto, that are on loan from the National Gallery of Scotland.

Titian’s two Diana paintings were commissioned by King Phillip II of Spain, and are related, meant to be seen as a pair. Though they depict two different moments from the life of the mythological figure, they are both tableaux of Titian’s masterful figures, pulled together by the common visual theme of a stream running through them. The two paintings are traveling to the U.S. for the first time.

Though Titian’s youthful experimentation had abated by the time he painted these works in his 60’s, his technical mastery was in full force.

Titian and the Golden Age of Venetian Painting: Masterpieces from the National Galleries of Scotland is on display until January 2, 2011.

For more, see my earlier posts on Titian, and on his Polyptych of the Ressurection.

Link: Titian and the Golden Age of Venetian Painting: Masterpieces from the National Galleries of Scotland, High Museum of Art, to 1/2/11
My previous post on Titian (Tiziano Vecellio), and Titian's Polyptych of the Ressurection
Lines and Colors is a blog about painting, drawing, sketching, illustration, comics, cartoons, webcomics, art history, concept art, gallery art, digital art, artist tools and techniques, motion graphics, animation, sci-fi and fantasy illustration, paleo art, storyboards, matte painting, 3d graphics and anything else I find visually interesting. If it has lines and/or colors, it's fair game.
New posts are announced on: